When 4G networks were launched about a decade ago, they represented a major step forward in mobile communications. 4G outperformed the preceding 3G system by as much as 500 times in data rate. Unbuffered streaming of high-definition content to mobile devices was made practical for the first time, leading to the proliferation of new mobile applications. These performance gains, however, only whetted the public’s appetite for blazing fast speeds. As the Internet of Things (IoT) takes shape, a smarter, faster, and more robust network is needed to keep up with new technological demands. The next generation of mobile broadband, 5G, is set to roll out across the world over the next year or two, and with it the way people use the internet is expected to once again dramatically change.

Although the difference in performance between 5G and 4G – as much as a 20-fold estimated increase in peak speed – is not as great as it was between 4G and 3G, the increase is significant enough that it will allow 5G mobile networks to outperform most current fiber optic broadband home networks and theoretically allow uninterrupted streaming of 4K HD content. It’s not as much the transmission speed of 5G, though, that could make it a viable replacement for the cable-modem/wi-fi arrangements that are currently common in homes – but rather it’s how 5G reduces data delays that is the largest leap. 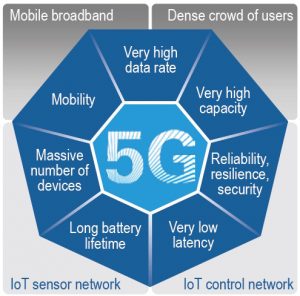 There are a number of factors that cause delays in data communications, especially over mobile networks. Although these delays are extremely small, they tend to accumulate and cause what’s known as latency, which is the time between when a data packet is sent from a source and when it’s processed by the recipient. 5G is designed to greatly reduce network latency, allowing multiple channels of simultaneous communication. This opens the door for technologies requiring robust, low-latency, real-time data and constant connectivity.

A major factor in determining the bandwidth of a data communication signal is the frequency of the carrier wave. The higher the frequency, the more digital data bits can be packed into a signal of a given duration. 5G will, in part, be able to make use of the extremely high frequency (EHF) band, also known as the millimeter wave band, which lies in the 30 GHz to 300 GHz range. Current mobile devices operate below 5 GHz. There is a tradeoff, however, when using the high frequencies. The tiny wavelengths have a shorter range and have trouble passing through some barriers and materials. 5G millimeter wave antennas are smaller, but more of them are needed.

5G will also be distinguished from 4G in its use of phased antenna arrays. The smaller antennas allow for them to formed into arrays that can create directional beams which help maintain connectivity with individual devices. 5G devices themselves can also have multiple 5G antennas, allowing several simultaneous connections to be maintained.

Along with the technological and lifestyle advances that are expected with the transition from 4G to 5G come some concerns related to the new technology. These concerns are generally centered around health and security. Higher frequency electromagnetic radiation is higher in energy and can interact more easily with living tissue and certain molecules than lower frequency waves can. Some are concerned with the potential health effects of constant or long-term exposure to EHF frequencies.

5G technology will rely more heavily on server virtualization than any previous generation of mobile internet. More virtualization means that this system will have to be more software based, which can be more vulnerable to security breaches. Furthermore, the virtualized systems will be more decentralized and located closer to local service providers. This decentralization is a boon for decreasing network congestion and increasing performance, but also provides more opportunities for potential attacks. 5G will require a greater emphasis on security protocols.

Is 5G A Health Risk?